Notice how I didn’t give it a specific room name?

As I sit here half-caffeinated, I can’t help but smile as I look around my office.

And crinkle my brow.

My Office.  It’s strange calling it that.  It’s been over a month since I staged a successful coup to take over our mostly overlooked dining room, and yet the title of office is still a bit new to me.

Purchased four years ago, our house is a modest 2100 square feet with a two car garage, four bedrooms and two living areas. It is by no means a small home, though I suppose some would think so.  For me, the girl who at one point had three children under the age of 5 sharing a room in a narrow two bedroom duplex….this is big.

Having two levels also helps the house feel big to me.  Bedrooms upstairs, life downstairs.  (Translation – lovely put together home downstairs, hot mess upstairs.) The choppy floorplan  downstairs, however, make the first floor feel smaller than it is.  The front living room and the family room aren’t big enough to carve out space for a living room/dining room combo.  And the small kitchen that’s nestled between the dining room and the family room only offers a breakfast bar that is shared by the family room. It also only sits two. Three if I had another barstool (one day….one day).

When we bought our home four years ago the empty room between the front room and kitchen was most obviously the dining room.  After all, there was no other place in the house to take on the distinction. Not to mention the low hanging chandelier, of course.

I was excited at this prospect originally.  An honest to goodness dining room!!  Finally!!  Not an eat in kitchen.  Not a tiny spot at the end of the living room.  A room for all things dining.  A table.  Chairs.  Storage.  Yes. Yes. Yes!

And then reality sauntered in, took off her practical no-nonsense shoe and lodged it at my head.

Here at Casa Dulinsky, the most used table for dining is the illustrious coffee table. Our dining table has been voted The Table Most Likely To Be Crushed By The Sheer Weight of Junk.  Four years in the running.  In my head.

You’re more likely to find remnants of last weeks snack of pretzels and grapes, hidden underneath a stack of coloring pages, than a freshly made, straight out of the oven dinner.  So it comes as no surprise that the dining room is no more.  Well….for the most part. 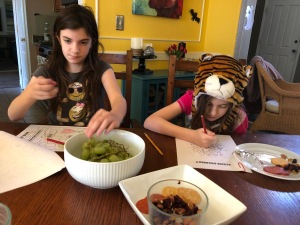 Here we have real-time photographic evidence of two homeschoolers eating a snack -lunch and working on their weekly worksheets.

In the beginning there was light.  And white.  Lots and lots of white,  White walls, white wall trim, and great google moogily, even white curtains. 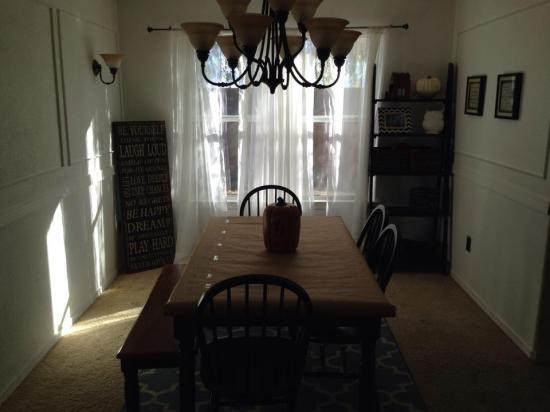 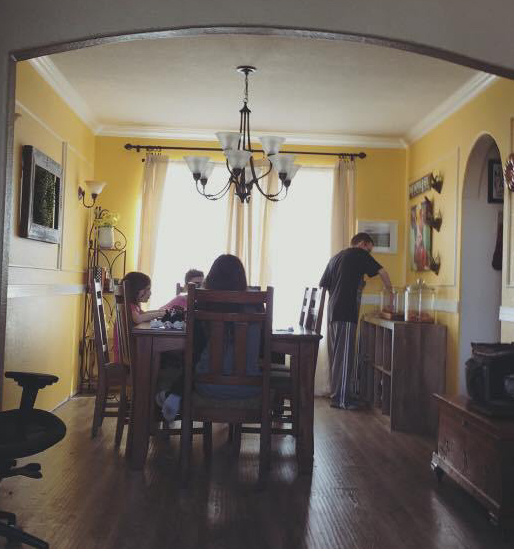 Over the next four years it changed.  First it was the walls, and the floors, and then the function. It went from dining room to classroom.

Here (above picture) we have a misguided attempt of turning the dining room into a more practical landing pad/classroom for our homeschooling.  It lasted perhaps two months.

There were two issues with this particular set up. Way too crowded.  Obviously.   And issue number two-  although we had finally eradicated the traditional dining room, we still needed one (on occasion).

After a bit of rearranging and intermittent tweaking, I think we finally got it.  For now. Though it wasn’t overnight. But throughout this past month, there was one united factor. The Mustard Seed office can convert into a dining room within 5-10 minutes.  Just move the computer to one of the two cabinets.  And the tray on my “desk” (the dining table is now multipurpose) corrals all my stuff and can be moved quickly as well.  Then just turn the table a bit and ta-da.  Dining room.

Mustard Seed Office version 1.0. Although I liked being able to look out to the front room, I found that this particular set up was a waste of space.  Not to mention the chandelier of doom.

Mustard Seed office version 2.0 didn’t even last a day, so there’s no pictures.  Basically, it was in the exact position we’d put it as a dining table (underneath the light fixture).  It was convenient, but also a disaster in the making.  The computer cord stretched mid-air from the table to the wall.  Anyone with pets, children, or a husband can go ahead and cringe with me.  Bye bye computer…..

So we tried something we never thought of.  Necessity really is the mother of invention.  I have never, ever tried angling my dining room table, until now.  And I love it.  The corner of the table is now closer to the wall and nobody is tempted to step over the cord.

Also, it takes up more space without taking up more space. I found it visually pleasing, but it still needed a few more tweaks. 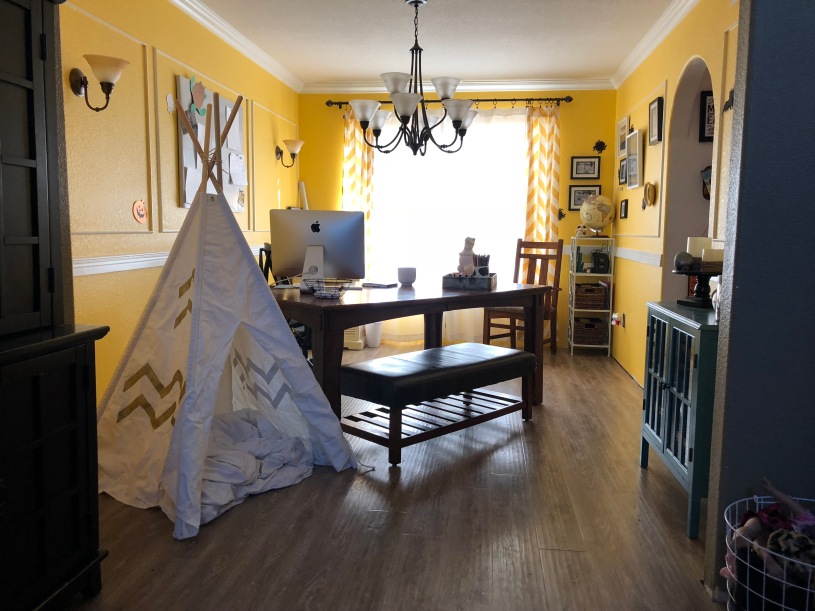 Mustard Seed office version 3.0 was  basically the prototype to the next and latest version.

That spot at the table with the bench became so popular that I began to fear for the poor Target bench.  It’s not really meant for so much use.  And though these two are little, there’s also two teenagers, and a grown man….. 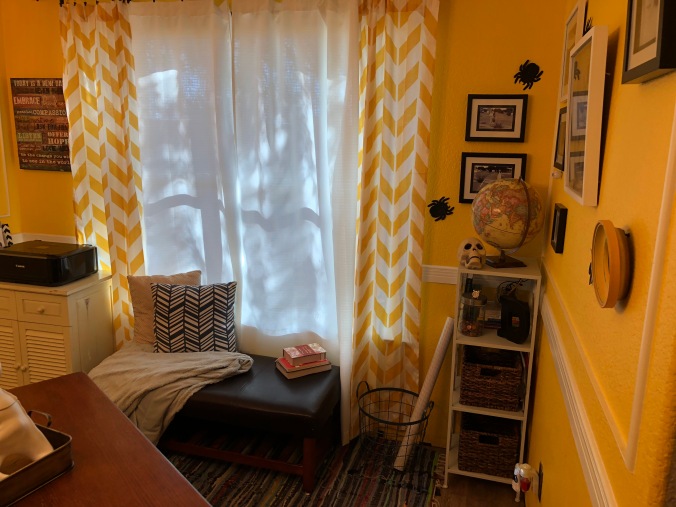 This is what happens when your lights aren’t turned on.  The bench got a new home under the window.

I had to choose- center the bench with the wall, or center it with the window and chandelier.  I chose the latter, and dumped out a basket of shoes onto the front room floor (note to self- clean up shoe pile later) and stuck a roll of wrapping paper in it, just because, you know.  OCD.  There had to be something there.

There we go.  The Mustard Seed office version 4.0  Finally! If you’re wondering why the teepee is there…animals. Our two cats love to climb in there and chill.  Also, it’s hiding the computer cord….practical staging ya. Practical staging.

I have future plans, but they involve having money.  Money trees aren’t a thing.  Robbing a bank is just way too much trouble. So, I’ll to do it like I always do.  Keep my eyes peeled for good deals, check the couch cushions for change, and add to it little by little.  (I’ll share more on that later.)

Speaking of little by little, I’ll leave you with our most recent project- the lighting.  As the room has evolved right before your eyes- I wonder if you noticed this one tiny change.  (Pauses to do that creepy stare Dora the Explorer does when asking the kids a question.)

How about a picture clue?

That’s right.  The wall sconces.  Same hardware, just different “shades”.  Somebody please comment and tell me what these are actually called, because I’m a moron.

I’ve been wanting new light fixtures for-ev-ah!  But a lack of money, ambition, and knowledge of installing lights has kept this fantasy from becoming a reality.

And then we went to Lowe’s.

I feel like that could be the title of my life story.  Lowe’s is, along with Savers one of our date night staples. And lately, we’ve been slowing our roll as we walk past the lighting area.

The above pictures are inspiring me to change the boob lights in my family room.  Yeah I said it.  Boob lights.  You know the ones.

Ahem, back to the topic. We started looking at the sconce shades and asked ourselves “what if we just switch the old outdated dirty looking ones for these?”, after chewing on this for a bit, we finally tried it.  After all, if it didn’t work, we could always just return them.

We were able to snag these Edison bulbs ($5 each) to go along with these two (under $10 each) bringing our sconce redo to a whopping total of $30!  We’d been eyeing sconces and most run about $50. Each.

We saved at least $80 (not including the bulbs), and the trouble of me driving my husband to the ER after electrocuting himself.  Trust me, it would’ve happened.  I’m a menace.  Banned from power tools and hammers, remember?

I’m also lazy, and that my friends was the real inspiration. 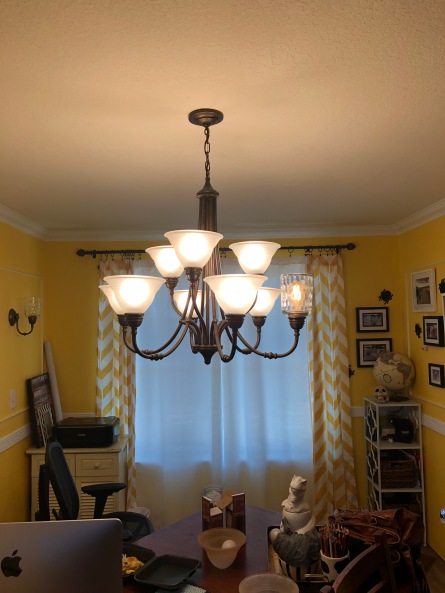 A little taste of things to come.  Norbert the T-Rex is ecstatic.

Next step- order nine identical shades (is it shades?) and do the chandelier.  Sure, it’ll be more than two sconces, but no ER trips….

7 thoughts on “The Evolution of “The Room””