You want to make God laugh?

Tell him your plans.

When I wrote the “I’m not dead” post, I had no idea that would be my last one for almost two months.  We were doing so good, you and I.  I’d write something witty, occasionally profound (just go with me here) and you’d read it, occasionally like it, maybe comment on it.  We were a team going full steam ahead, and then life waltzed in and swung a giant bat right at my head.  It was a doozy.  I’m still seeing stars here.  So a quick recap and then boy do I have some news for you.

There was the usual holiday hullabaloo involving Christmas pageants, presents, and spontaneous car rides to go look at the lights.

I’ve got a few pointers for you:

If you do, I’m gonna tell you right now: someone is going to lose it.  The dog is going to kamikaze into your youngest, slamming her soda against her, completely soaking her. She will then complain for the entirety of your ill-fated drive where the only lights you’ll see are the red and green kind that signal traffic.

Even with all the chaos and calamity we found time to deck the halls, ice the cookies and just be silly. 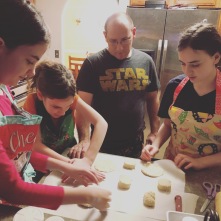 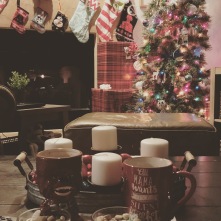 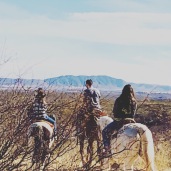 We started January with a spontaneous trip out west to Tombstone, Arizona where we stayed at an amazing ranch.  It was a very short trip, only two nights and two days of exploring Tombstone and nearby Bisbee, Arizona before jumping back into our car and making the four hour drive home.  The entirety of our trip I plotted, planned and photographed to my hearts content- I had plans, big plans to kick off the new year with a blog post all about our short family road trip. I will definitely be blogging about this- just maybe not right this moment because…..

I kid you not.  The very next day my husband received word that his transfer to move up North was in fact approved. Suddenly a giant ominous ticking clock appeared, one counting down to mid- April when the Dulinsky’s will be piling 2 adults, 2 teenagers, 2 girls under 11, a kamikaze dog, and three…that’s right, I said three cats into a 2007 Chevy Suburban and begin an extremely long drive to…..

Have you guessed it yet?  I’ll give you a hint:  scroll back up….no, further, more , keep going—there you go.

That’s right folks, these crazies are packing up and moving this circus to Maine.

Now before you get all excited envisioning $4 lobsters and summers by the coast, let me go ahead and pop that bubble.  We’ll be much much further north.  In fact, if I want a sandwich from Subway I’ll need a passport…. Can you imagine that conversation at the border?

“Ma’am, purpose for your visit to Canada today?”

It’s going to be quite the change from living in a city of 100,000 to  a town of about 6,000, but it’s a change that I’m looking forward to; despite the fact that there will be no Target or Hobby Lobby (the UPS guy and I are gonna be BFF’s by Labor Day….).

So in a nutshell-  I’m not dead, but by the time I finish this move, I’ll wish I was- at least for a little bit. Until then, I hope to be blogging, but let’s just play it by ear.  I definitely have a lot to talk about. I sure have missed you all and as always, thank you for being you and allowing me to be me. Now if you’ll excuse me I need to go get more bubble wrap.  So.  Much.  Bubble. Wrap.

Oh, and would anyone like two buy a home in southern New Mexico??????

3 thoughts on “The Maine Event”